You may also be interested in visiting the Rochford District Community Archive. This website preserves memories of the past for the benefit of future generations.

There is evidence that Great Stambridge existed as a settlement in the Iron Age (earlier than 500 BCE), and again in Saxon times. Excavations at Hampton Barns found that at one time a creek had formed there and two distinct village settlements of huts had developed. Hut doors were discovered and pottery dating from 500 BCE. It is thought, though, that the occupants were forced to move to the Continent because of deteriorating weather conditions and variations in the water table.

As far as we know, there were no Roman settlements in Stambridge though Roman remains have been found in Rochford.

Between 450 and 740 CE Britain was invaded by the Jutes from Jutland, Angles from south of Denmark and Saxons from Germany. Britain was divided up into the Seven Kingdoms of Northumbria, Mercia, Wessex, Essex, Sussex and Kent. The Saxons divided their territories into Hundreds, one of which was the Rochford Hundred.

The Saxon villagers at Great Stambridge had a stockade to defend themselves against attack from the sea and river and they showed great care in building it. They cleared about 30 ft. of turf and then cut a ditch. Timbers were carefully placed, stakes driven in on both sides and the centre filled with turf. A palisade was then built on top.

The original stone church of St.Mary’s and All Saints, in Great Stambridge, was built about 1020-40. It was shaped like two boxes, the larger being the nave and the smaller the chancel. There may have been a wooden church before that.

The tiny church of St. Mary’s at Little Stambridge was probably built around the same time.

William I the Conqueror and The Domesday Book

Both Great and Little Stambridge are mentioned in the Domesday Book. Each consisted of two inhabited areas or “manors” in the surrounding forest.

After the Norman Conquest Earl Sweyn, who lived at Rayleigh, was a tenant of Great Stambridge under the Bishop of Bayeux who, in turn, held it from the King. In 1086, the time of the Domesday survey, there were ten families of farm workers, two ‘beasts’, 25 swine and 58 sheep. The manor we know as Barton Hall was held under Sweyn by a man named Wiard; he had two families of farm workers, one slave family, and pasture for 100 sheep.

Little Stambridge, like all feudal lands, was the property of the King, but a Norman named Thierri Pointel had taken possession and had been allowed to remain. He had in his manor two small farmers and five families of farm workers. The smaller manor, probably that known as Coombs, was the property of Canterbury Cathedral and their tenant was Ralf Baignard.  There were seven farm workers’ families and pasture for 200 sheep.

The Domesday Survey was made to calculate the taxable value of the country. It omits much that we would like to know, but the picture of Stambridge it leaves is of four small settlements in the Essex forest, each grouped round its manor house, very largely cut off from the rest of the world.

Barton Hall or Bartons, once a mediaeval mansion, now long since demolished, stood at the extreme eastern end of Great Stambridge parish overlooking the water on an arm of Bartonhall Creek. After the Norman Conquest, William the Conqueror gave this Manor to Sir Auvrai Le Breton who had come over from Normandy with the King and fought with him at the Battle of Hastings.

When Sir Auvrai le Breton died, his son Richard inherited Barton Hall. He was a popular courtier and spent much of his time at the court of Henry II. At this time, Sir Richard Le Breton was the close friend and confidante of Prince William, the King’s brother. Richard found Stambridge, being nearer to the Court, a convenient place to live. Besides, the Royal Forest of Essex, stretching as it did to the extreme boundaries of Rochford Hundred, included Stambridge and frequently the King with Prince William and their courtiers would hunt this way, passing the night in the conveniently situated, out-of-the-way, Barton Hall.

Sometime about 1250 the south wall of St. Mary’s and All Saints Church, Great Stambridge, was taken down, a row of supporting arches built in its place (you can see the remains of a south door, probably for the priest, now filled in) and the church extended by the south aisle being added on.

In 1264, Rochford was granted the right to hold a market and Stambridge would have benefitted considerably from this.

About 1350 the east wall (the altar end) of the church was taken down and the chancel enlarged by extending it eastwards.

About 1450 the church tower was built (without the brick parapet) and the north porch built.  Visitors can still see the ancient main timber frame.

Hampton Barns, one of the three manors in Great Stambridge in earlier times, stood on Hampton Barns Creek. In 1517 it was known as Hampton Barons and from 1549 Hampton Barnes.

In 1605, Mary Forth of Gt. Stambridge Hall married John Winthrop in Gt. Stambridge Church. She died at his home in Suffolk when she was 32 but John went on to become Governor of Massachusets. There is a window commemorating him in the church, paid for by the Winthrop Society in the USA. Follow this link for more.

The Lord of the Manor at Little Stambridge was Sir James Bourchier and, in 1620, his daughter Elizabeth married Oliver Cromwell who, in a varied political and military career, became Lord Protector of England. Oliver would have visited Little Stambridge frequently. For more about Cromwell, click here.

In 1670 the Governors of Charterhouse at a Court held before the Chief Justice of the King’s forests, claimed within this Manor the right of pillory and gallows and examination of weights and measures.

Broomhills was the 18th century home of John Harriot, one of the founders of the Thames River Police. He was born in Stambridge, in 1745. After a little schooling he was placed in the navy, served in the West Indies and the Levant, and was shipwrecked on the Mewstone Rock off the Australian coast. He was quite an adventurer.

During the 1790’s, the Thames was a very busy highway and crime was rife. Merchants were losing an estimated £500,000 a year (equivalent to over £46 million in 2015) of stolen cargo from the Pool of London by the late 1790s. Around 1797 Harriott prepared a scheme for the establishment of a river police force for the Port of London. He joined forces with Patrick Colquhoun and philosopher, Jeremy Bentham. Armed with Harriot’s proposal and Bentham’s insights, Colquhoun was able to persuade the West India Planters Committees and the West India Merchants to fund the new force.

Colquhoun reported to his backers that his force was a success after its first year, and his men had “established their worth by saving £122,000 worth of cargo and by the rescuing of several lives.”

For the full story of John Harriot, click here. 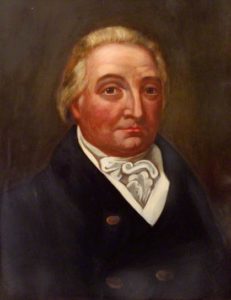 The brick parapet was added to the tower of Great Stambridge church in about 1803 when, with the beginning of the Napoleonic Wars, there were fears of a French invasion. The extra height was needed so that it could house a beacon, one of a network that would be used to warn if an invasion fleet were seen off Foulness.

The church at Little Stambridge was refurbished in 1870 but, as it only catered for the residents of Little Stambridge Hall, it was demolished in 1891. The two parishes were then united to form the parish of Stambridge. A number of gravestones may still be found among the trees. The former Rectory is in Apton Hall Road. 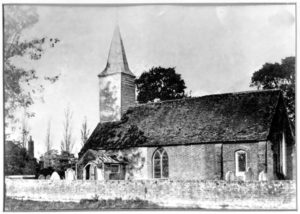 Little Stambridge Church photographed shortly before it was demolished in 1891 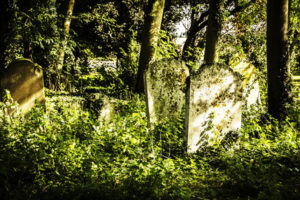 The graveyard at Little Stambridge as it is today.

The Education Act of 1870 required local authorities to build schools in parishes that did not already have one. The school at Stambridge was built as a result and opened in 1877. 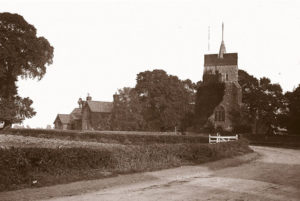 This photograph shows the church and the primary school next to it. You can just make out the bell tower on the school roof. The brick parapet on the church tower is clearly visible. 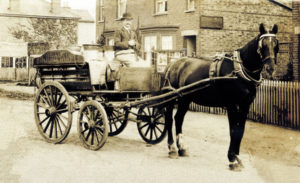 In 1904 the Rankin family built a shed, with a corrugated roof, as a place for the farm workers to relax. Later on, it would become the Memorial Hall

In March 1918, the group of local farmers clubbed together to buy what is now known as the Memorial Ground and gave it to the residents of Stambridge with the Parish Council as Trustees. After World War I, Harold Rankin built the front part of the Memorial Hall and dedicated it to the memory of the eleven Stambridge men who lost their lives in the war.

There is a Roll of Honour for those who died in World War I. Follow this link.

A very important contribution to our success in World War II was on our doorstep. Canewdon had one of the very earliest radar stations. Their tall towers could be seen for miles and was one link in a chain around the south and east coasts.

The Floods of 1953 affected much of Stambridge including Mill Lane and parts of the main village. A contemporary account noted many pockets of land were above the flood level in spite of being near the river.

“At some distance down the lane by the river past the church stands “Waldons”.  It is a modern house set on a peninsular, south of Bartonhall creek and north of the River Roach.  Built between two sea walls, it former name was, appropriately “Wallsend”.  It is known that in earlier years a farmhouse stood on the site.  The present house was built in 1953 to replace an old wooden structure, and although the East Coast floods of that year caused considerable damage to property in the vicinity of the water, Waldons stood above flood level and was unaffected.”